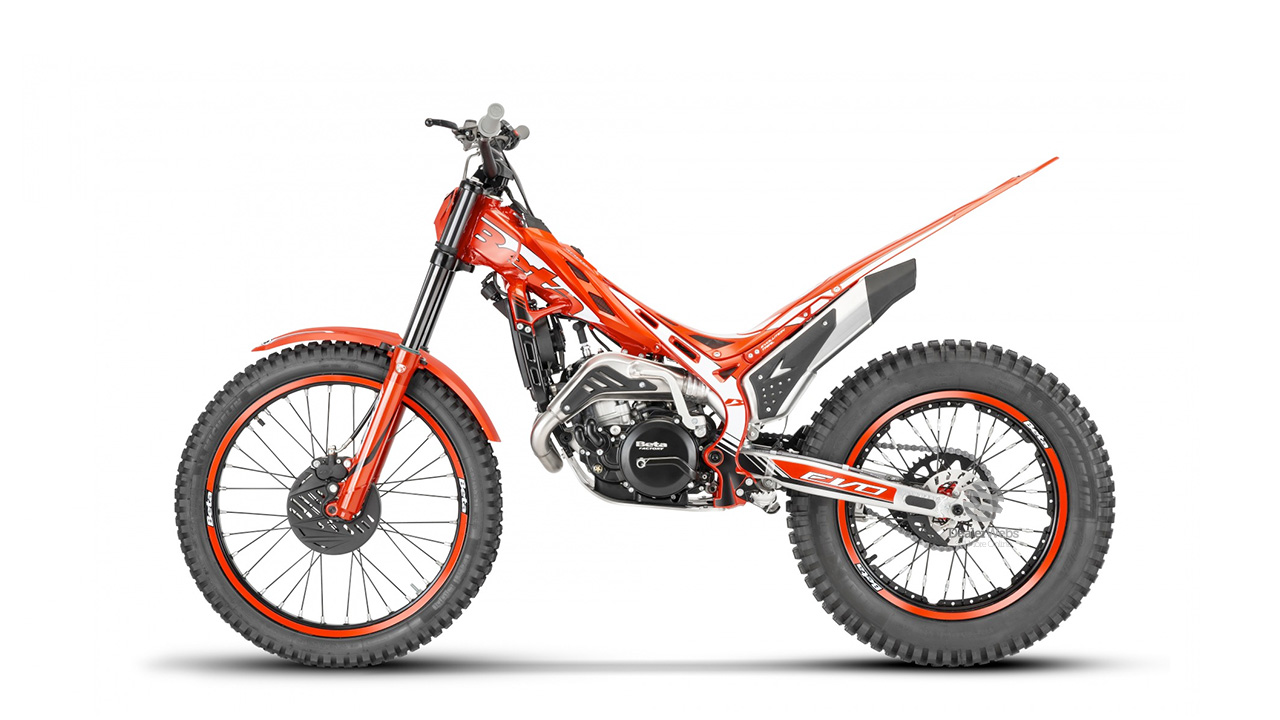 With the TR, ZERO, TECHNO, REV and, more recently, EVO, Beta has set the benchmark in the trials world since 1979, when it presented its TR 50 at the Milan Motorcycle Show. Thirty years of evolution later, and with a history of great riders and victory in the highest Trials championship classes, not to mention the satisfaction of users that ride the bike in a non-professional capacity all around the world, the EVO was born, the most high-performance Beta Trial of all time. An inspired project that, thanks to all the subsequent innovations relating to the chassis, engine, graphics and electronics, has proved particularly successful for the Italian manufacturer.

For the EVO MY 2023, Beta has decided to further develop its models, both functionally and aesthetically, reserving the most radical engine updates for its premier model. All modifications that are introduced to satisfy ever evolving consumers, as tastes and riding styles change, and to reaffirm that functionality and reliability for which the models have always stood out.
The 2023 update confirms the ongoing commitment that Beta shows in the trials arena, a discipline that is of fundamental importance to the Tuscan brand. The introduction of a series of premium components highlights the end goal, which is that all new-generation trial riders are able to fully enjoy the EVO's capacities, whether in competition or when trail riding.

The EVO range is one of the most extensive in this class, and continues to offer a total of six different models, each with its own character and able to meet the needs of all riders, raising the potential and level of enjoyment that each experience:

Evo 300 2 Str
The 300 2 Str is the range-topping model in the Evo family. A bike for lovers of big capacity engines with impressive torque at all engine speeds, and the perfect base for competing even at pro levels. The size of both the frame and the engine have been optimised to maximise the ability of the bike to overcome even the most challenging obstacles and the most technically difficult trials. The ideal solution for expert riders looking for bike with class-beating performance, but which is intuitive and easily manageable from the moment you get into the saddle.

Let's take a look at the innovation features that make up the new Model Year.

New features introduced across the entire range include:

• Radiator grille: completely redesigned. As well as optimising the air flow directed to the radiator, it also boasts a greater protective surface in the cap and radiator body area, to prevent these components from sustaining damage when in contact with branches, stones or in the case of a fall.

• Tank cover: with a new design. The shape better envelops the frame and allows all the cable routing to be covered, for a clean and more orderly look. And this new form also effectively incorporates the mapping switch. The EVO offers a choice of two different engine maps that the rider can select with a convenient button on the tank cover. This location makes the button easy to reach while offering protection against knocks and unintentional operation, while an LED indicator lets the rider immediately identify which map is currently in use.

• Graphics: the bike's look and performance are accentuated in equal measure with the latest EVO update. The geometric graphics and new anodised aluminium swingarm ensure an elegantly natural look reminiscent of the racing world. The frame is painted in distinctive Beta red to accentuate the beauty of the hydro-formed aluminium structure, a hallmark feature of the EVO. The filter box is now black again but remains the same functionally-speaking, as does the dedicated TwinAir foam filter. The fork sheaths are now in characteristic Beta red.

• Domino grips: achieving maximum freedom of movement on the bike also means having stable and comfortable handholds on the vehicle. The new Beta-customised Domino grips ensure comfort and hold, so that the rider never loses contact with the handlebar. Black levers emphasise the refined look.

• New shock calibration: the EVO shocks come complete with all the adjustments a rider needs to tailor the bike and identify the ideal set-up but, in order to enhance the rideability, the Betamotor technicians have harnessed their experience to implement a series of setting updates to boost the progressiveness, responsiveness and damping. As for the fork, the settings and quantity of oil contained in the two stanchions have been revised in order to boost the progressive response during the most extreme drops. This means that EVO is equipped with an asymmetric fork, with the left and right hand stanchions differing both functionally and in internal volume. The left hand side features adjustable spring length, for setting ride height, while the hydraulic functions of the fork are settable on the right hand stanchion, for customising the damping behaviour and responsiveness of the front end. By using different oil volumes calibrated specifically for the left and right hand stanchions, both the progressiveness of the fork and the precision with which feel is transmitted to the rider have been improved. As for the shock, and in order to improve the bike's readiness, Beta has worked on the setting, boosting reactivity during the rebound phase. This allows EVO to offer the rider a greater sense of lightness, particularly when 'bouncing' to reposition between obstacles.

• Tyres: Michelin Trial Light at the front and Michelin Trial X-Light Competition at the rear are the choice for professional riders and now, with the MY23, for all EVO owners, who will experience a heightened sense of grip with this extremely lightweight tyre, which marries perfectly with the precision and handling typical of Beta bikes.

The larger volume Beta 2T engines have undergone significant updates, all implemented in order to improve vehicle performance and rideability, in line with the Beta philosophy. The new components equipping the EVO 2023 include:

• Crankshaft and piston rod, the latter with an interaxle spacing that is reduced by 1.5 mm for a length of 114.5 mm. These new components offer multiple benefits, both on the performance side, for more rounded delivery, and in terms of the vehicle's dynamics. The bike is more manageable thanks to a reduction in its weight and alternating masses. Handling is improved while vibration is reduced.

• Cylinder: brand new. For this component, the timing has been revised to improve the torque at low engine speeds, while the overall weight is reduced.

• Engine map: the engine mapping has been optimised, particularly the ignition map, in order to set up the components in the best possible way and exploit the power and tractability for which they stand out.

• Exhaust manifold: a manifold protection has been installed to avoid any overheating and to protect the manifold from impacts. As well as being functional, this rounds out the bike's overall look. (Also mounted on 125 2T).

Get the latest news and offers straight to your inbox